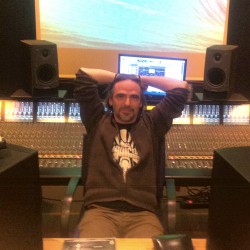 Belgian based engineer/producer Werner Pensaert began his career as a keyboard player/session musician and then went on to produce and engineer a wide variety of Belgian artists such as Aroma di Amore, Wim Mertens, Jo Lemaire, De Kreuners, Toy, The Scabs, Soulsister, The Radios, The Confetti’s etc. His talent encompasses and accommodates a wide variety of styles and has earned him a great reputation particularly for ‘live’ orientated sessions, and especially when he tours around with his renowned analogue outboard gear. A consummate professional, he has worked with some of the top names in the industry such as U2, Rammstein, Manic Street Preachers, Kaiser Chiefs, K’s Choice, Jef Neve, Douwe Bob, The Lau, Hooverphonic, A/T/O/S and Milk Inc, along with many others. He remains in high demand due to his skill and professionalism for ‘live’ and TV broadcast work. These days he is working a lot on high profile Jazzrecordings, as well as lending his talent to notable events such as ‘Rock Werchter’. Among other things he still finds time to teach at PXL (Belgium rock school) and hold frequent workshops at Ho Gent (Producers department).